Howdy!
Here are this last week's Forex comics.  Typically there would be only one Forex comic.  They're usually like Highlanders (the immortal humanoids, not the cars) in that they fight for dominance until only one remains.  Also, all my Forex comics have Christopher Lambert's gravelly voice.  But in this case I misread the instructions and so a second version had to be done.
This comic is based on the news that, in terms of size, Apple has just surpassed Microsoft.  In the first comic, I depicted Tim Cook (Apple's current CEO) planting the flag above the Microsoft-colored flag.  It was the inclusion of Tim Cook that ended up being incorrect.  Subsequently, the second version featuring the phone planting the flag came to fruition.  And so ends the saga of the two comics.
I'm trying to come up with something insightful to say about either of these illustrations, but both were pretty straightforward and so I'm having a hard time.  Also it's Sunday night and the creativity that typically fuels my Algonquin Round Table-like wit is not being so good with the stuff and things.  I think the drawings in both of these comics are adequate, which is to say that they're functional without being something to write home to Mom about.  The caricature of Tim Cook (its superfluousness notwithstanding) is not my best, though it's possible someone might be able to recognize the drawing as Cook by making the link with the flag.  He looks a bit young in this drawing.  At any rate, I'll try to do better with the comic this coming week. 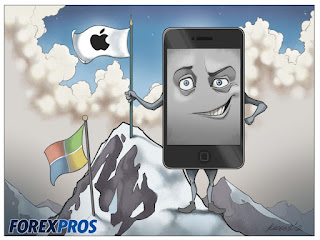 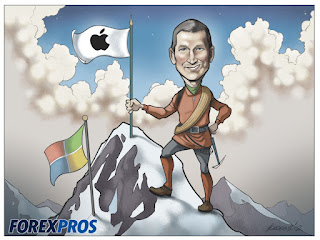 Posted by Noah Kroese at 6:01 PM No comments:

The feature art for "Lindy's Sports Annual" this year covers a myriad of new issues facing college basketball coaches today.  Most prominently, the fact that players (particularly top players) change schools and teams these days like they're changing their shorts.  They're looking for the best possible position and prospects for themselves, but this can make it hard for coaches to build strong teams.  Part of the strength of a team comes from their ability to work both with their coach and with each other.  Part of this strength comes from building trust and familiarity, which is next to impossible when players aren't staying.

So, after burning through dozens of different ideas for this complex story, my editor and I settled on the idea of a fictional board game called "The Transition Game" (this was the original title of the article anyway, so it was a natural fit).  The game shows many of the difficulties facing the coaches of top teams including players transitioning, getting injured, getting into legal or academic trouble, etc.

The logo features a revolving door, which I thought was a great image for the rapid movement of the players between colleges.  It's often used as a negative connotation in politics, even though I don't necessarily think the revolving door deserves this disparagement.  Revolving doors are efficient ways to enter or exit buildings and, to all revolving doors reading this post, I salute your stoic, reliable work.

I was attempting to use a 1970s-like board game aesthetic with the font and the colors.  Though I'm a child of the 80s, I find the imagery of past decades pretty appealing (except for the imagery of the 80s).  I think I was only partially successful, as the result ended up being a bit of a hybrid between the classic MB board games and modern visuals.  But I still like it.

I like details.  You probably could have guessed that, even if you'd never read any of the hundreds of posts on this blog where I say exactly that.  This illustration has what I think are some pretty excellent little details:

-The "Finish" square has the words "Congratulations! Proceed immediately to the next season!"  This is a reference to the never ending grind faced by top coaches who move straight from a championship into recruiting new players.  Sometimes literally the next day.

-The jersey on the "Player Stolen!" square has the number 459 on it, which is the police radio code for burglary.

-The money features NCAA president Mark Emmert.  Written on the money are the words "Absolutely NOT for Student Athletes", which is a reference to the fact that, in spite of making an intense amount of money for the NCAA, college athletes aren't allowed to receive any compensation for their work.

-Perhaps my favorite detail is the John Calipari circle.  Calipari is often seen as the man to beat, given both his successful team and his ability to bring in top recruits.  The efficacy of his methods aren't in question, but the ethical standing of them sometimes raises eyebrows.  The idea of including Calipari as the King was my editor's idea, and I think it was a great one.  Plus, I love the drawing.  It's one of my favorite parts of this piece.

All in all, this is one of my favorite illustrations for "Lindy's".  So much work.  So much fun. 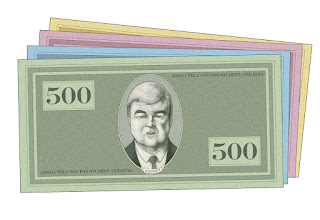 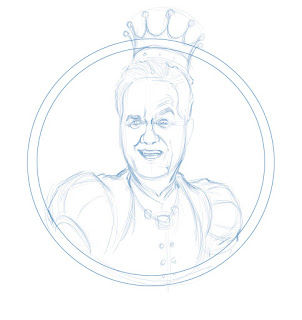 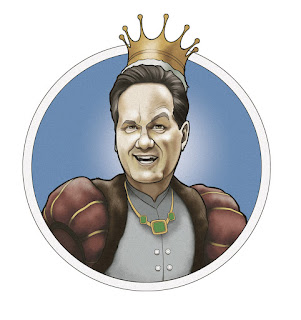 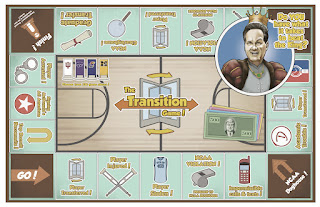 This last week was dominated by my perennial assignment for "Lindy's Sports Annual".  It's always at least two things: 1.) Fun.  2.) Backbreaking.  It can easily be both, even though they seem contradictory, because it's drawing.  And I likes drawing.

Between "Lindy's" and Forex, I worked 60 hours in four days last week.  Amazingly enough, I didn't go crazy and I also managed to draw some things I'm pretty proud of.  So here they are.

This first one is actually the secondary art.  It accompanies an article about the changes taking place in college sports and how those changes are dominated by college football and money.  College basketball (the focus of this entire issue of "Lindy's") is mostly a side-note in this shifting landscape.

Overall, I'm happy with the way this one turned out.  I think the characters are strong and well-drawn.  I would have preferred more time on this (as always), so there are a few things I would have done differently with more breathing room: I would have played with the composition a little more in order to make things less busy visually, drawn the Duke Blue Devil in a less goofy fashion, and made the bus a little more gritty.  Drawing things digitally is great in many respects, but often the product comes out a little too clean-looking, even for a severe type-A personality like myself.  Lines and colors are perfectly uniform by default, so I have to work on re-creating the imperfect textures and edges you see in the real world.  But when the clock is ticking, this part of the process often has to be left out.

Still, like I said: I'm not complaining about this one.  I like it.  And I got to draw a bus, which I don't think I've ever done before. 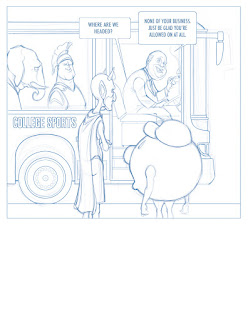 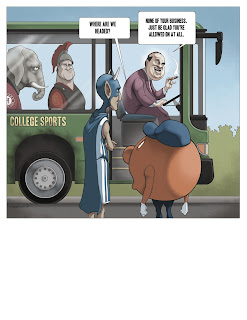 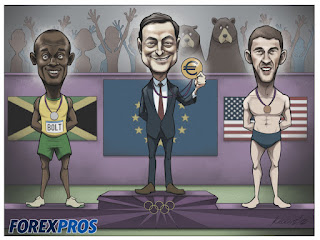 Here's this week's ForexPros comic illustration.  As always, I was given the illustration subject without an explanation of the subject matter and, because I'm only marginally aware of current financial news, I can only place an educated guess on the exact subject matter.  I believe this cartoon has to do with Mario Draghi's recent hints at a European Union round of Quantitative Easing.  This is something Germany's Anghela Merkel may oppose, as Germans strongly oppose anything that might lead to inflation.  I learned from "Planet Money" that many Germans point to out of control inflation as one of the main reasons for Hitler's rise to power, hence their vehement aversion.

I took a brief look at the comments on this cartoon, which I normally don't do, and was pleasantly surprised at the number of "likes" and positive comments.  I'm a bit gunshy about internet comments on my work because of my days as a political cartoonist.  I think many of the criticisms I received were fair enough, as I was never a great political cartoonist.  I could draw well, but I don't think many of my cartoons were well-conceived.  Many were knee-jerk emotional reactions to complex political and social situations.  I will say, however, that many of the comments could be described the same way.  Some of them were personal attacks and many of them sincerely hurt my feelings.

As a brief side note, the blog on which many of my cartoons were posted recently made national news over a fight on internet anonymity.  One of the commenters was accused of libel and the paper that owns the blog was sued to discover their identity.  The issue was whether or not internet anonymity is a valuable tool that foments discussion or whether it's a way for trolls and jerks to hide behind a shield of anonymity and make nasty comments with impunity.  I think both are actually true, but I'm against anonymity in forums where intelligent and educated discourse are meant to take place.  Basically, my opinion is that using your real name in an internet discussion is a little closer to talking face to face.  There are things most decent people just wouldn't say to someone's face, regardless of how much they disagreed with their social or political opinions.

There has been some discussion in this country (U.S.) about the ever-increasing hostility between the two main political camps.  There seems to be less and less civil debate on the issues.  There's a lot of accusation and saber rattling and a lot of oversimplification and exaggeration that demonizes the "other".  But it's all done at a distance.  It's done over the news and on the floor of the Senate and on talk shows and on the internet.  Maybe this hostility could be curbed if we had some of these discussions while we're looking each other in the eyes.  The irony of typing this up on my blog is not lost on me.  But nonetheless, I think using our real names when we're talking to each other on the internet is a good place to start.  It might allow us to think of the person on the other end of the internet as a human being rather than as an abstraction to which we can say whatever comes to mind, however hostile.

The illustration itself: I'm really satisfied with this one.  It was probably 12-14 hours' worth of work, but I love the way it turned out.  I think the expression in the faces of Usain Bolt, Mario Draghi and Michael Phelps are all funny.  I think the likenesses are good, and I think it's the right amount of exaggeration (with some of the past Forex work, I've struggled to find proportions that are expressive and cartoony without being ridiculous).  All in all, this is one of my favorite pieces for Forex. 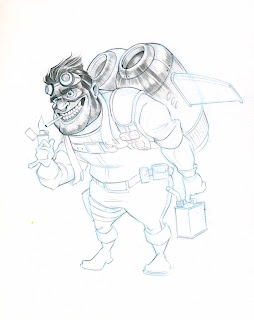 Here's a sketch I did a couple of weeks ago while I was on the road.  Nothing spectacular.  The character design isn't exactly dynamic, but it was still fun.  And, of course, nothing's quite the same as working the old-fashioned way.

Posted by Noah Kroese at 4:01 PM No comments:

Hiya,
Here are some recent quickstart (instruction guide) illustrations for the Aqualab instrument by Decagon Devices. 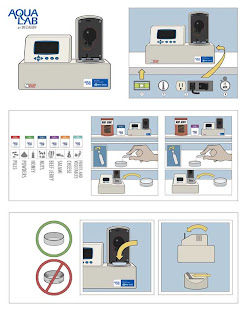 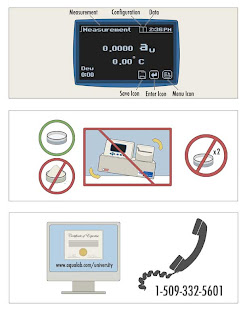 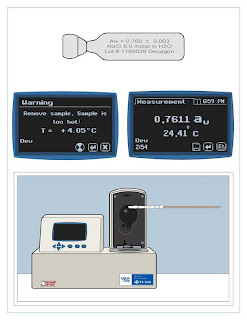 Cheers.
Posted by Noah Kroese at 3:54 PM No comments: