Fairly recently, I was asked to create some illustrations and designs for Silverwood Theme Park.  Silverwood is a western-themed ("western" meaning American old West in case you were envisioning Western Europe) park in Northern Idaho.  It's been there for a number of years and continues to grow both in scope and in popularity.

These illustrations and designs aren't the first time I've worked for Silverwood, though the last time was 15 years ago.  It was actually one of my first jobs.  I worked all sorts of positions during my tenure there (which spanned two seasons): I made burritos, hot dogs, funnel cakes, worked as a bar back, staffed private events, and worked in the park warehouse, which supplied the park with everything it needed.  It was a great summer job and I loved being "behind the scenes" at the park and getting to see the way things work.

Now, all these years later, I get the opportunity to work for the park again, this time in my capacity as an illustrator, which is crazy exciting.  I've wanted to illustrate for Silverwood for a number of years.  It always seemed like it would be a great fit.  Though I've always avoided labeling myself as a specialist in any one style of illustration, I have to admit that the cartoon side of illustration is probably where I feel most in my element.  I've always been in love with the imagination, the expressiveness, and the personality of cartoons.  All of these traits can be seen in spades all over the park, which is why I'd always hoped to be able to contribute to their aesthetic.

The first project was a coffee label for an upcoming product line called "Golddigger Dan's Coffee".  A label involving an old prospector?  What's not to love about a job like that?  It was crazy, stupid fun to draw.  First up, you'll see the initial versions, followed by a revision that included a re-design of Dan's face, the addition of a background, and finally a label design for the coffee. 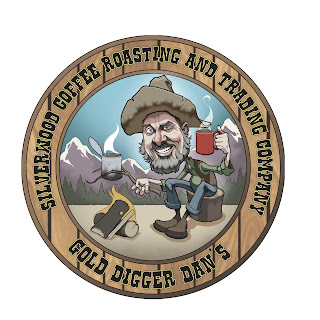 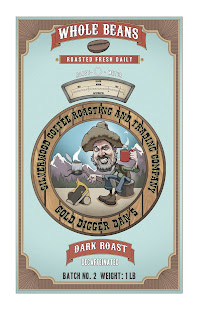