This was a very quick design to accompany an older illustration (the lysimeter project). Just wanted to share it (it's the text and the accompanying symbol to the left).

Posted by Noah Kroese at 3:01 PM No comments:

Hello again! Remember the concepts for the CTD marketing material? No? Well, I was asked by the good people over at Decagon Devices to work up some concepts for a new sensor of theirs called the "CTD", which stands for conductivity, temperature, and depth (those are all things it measures). If you want to take another gander at the concepts, they're in an older post on the blog. Go ahead. I'll wait.... Ok. Did you look? Well, here are the finals. The pull apart illustrations are extremely fun to do. When I was a kid, I always wondered how things looked on the inside. This went for gadgets and machines, rocks, and just about everything else. I think part of the fun of doing this kind of illustration stems from being able to partially satisfy that curiosity. I drew this one at a very large size, so it's not necessarily easy to see some of the detail (like the brushed coating on the stainless steel cover). The three panels are all environments in which the CTD would likely be implemented for various forms of data collection and research. Again, the benefit of illustration here is that these panels can show cross sections of the environments that would be extremely difficult to show using photographs (a cross section of a stream bed, for instance). And again, these were pretty fun to draw. I'm always a little tempted to draw fossils or buried pirate treasure into the soil, but the sad fact is that it's unlikely such items would actually be present in these environments, particularly at these depths. So, for the sake of accuracy, the dinosaur bones and treasure chests were excluded. Sigh. 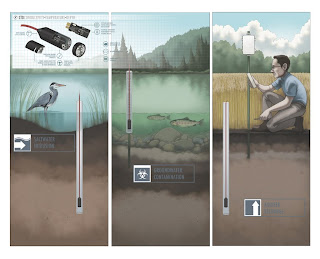 Cheers.
Posted by Noah Kroese at 2:56 PM No comments:

Hello! As always, I'm sorry I have been remiss in my posting as of late. It's been an extremely busy month. But the good news is that I've been working this whole time, which means not only is there a pile of new thingies to share with you, there's also a queue of pending thingies that will eventually be shared. Hooray! The first is a pair of drawings for the food geeks video. I redid Momofuku Ando (inventor of the Cup O' Noodles). This version is based on an older photo of him (well, a photo of him when he was older, which I suppose would make the photo newer chronologically speaking). The other is a drawing of the host/narrator of the video. I will also post a link to the new video. http://www.youtube.com/watch?v=67YSvZRPvIA 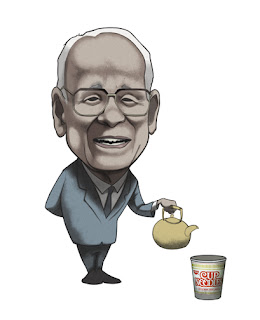 Cheers.
Posted by Noah Kroese at 2:36 PM No comments:

http://www.kickstarter.com/projects/2024291706/saturday-dinosaurs-robots-and-octopi?ref=live
Posted by Noah Kroese at 6:13 AM No comments:

Here are a couple of recent additions to the sketchbook.  I was traveling over the weekend and did these mostly to keep limber.  I didn't spend as much time on them as I should have and, consequently, I don't think either of them is particularly interesting.  But, as an exercise, they served their purpose. 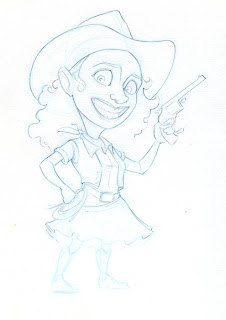 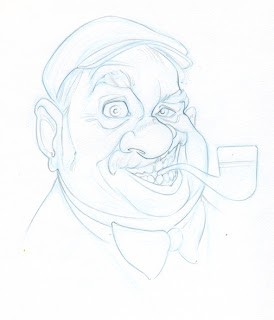 Posted by Noah Kroese at 8:11 AM No comments:

In thinking about my posts about various illustration projects, I realize I often begin with something like, "Client fill in the blank asked me to do an illustration...".  That's always true.  Jobs always begin with a client asking me to work on one thing or another.  But the subtext there, and what I hear in my head the entire time I work on the project is: "SWEET!  I get to draw for this project!"  It's an enthusiasm akin to that of a dog when shown a tennis ball or leash.  Fun is about to be had, and I am going to make the most of it.

With that in mind, recently the good folks over at Decagon Devices, Inc. asked me to work on some illustrations for a video about the history of food innovations.  The style is modeled after "Monty Python".  The characters include: John Harris, the inventor of bacon, Momofuku Ando, the inventor of Cup O Noodles, Louis Pasteur and John Twining (Pasteurization and refrigeration, respectively), Escoffier and Careme (the menu and designer cakes), and more.

Along with being intensely fun, this project was also a bit of a departure for me stylistically.  I guess you could argue that my style changes depending on the projects' requirements, but I can't really remember drawing in this way before now.  It was great good fun.  I even managed to learn a few things.

My favorite is probably John Harris, mostly because of his expression.

Here's the link to the video: 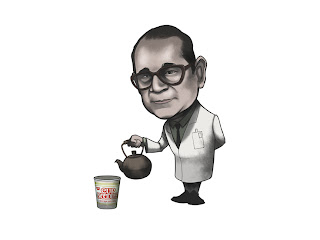 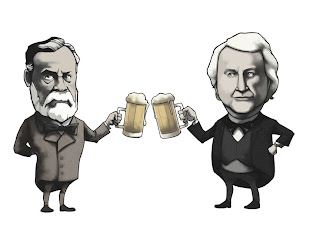 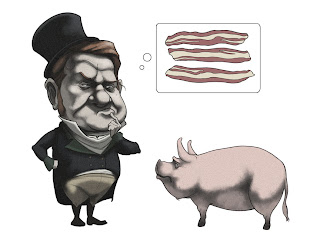 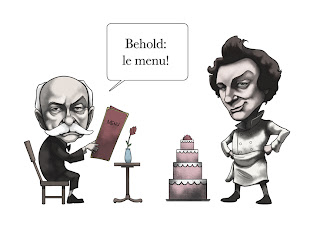 Posted by Noah Kroese at 8:31 AM No comments:

Hello!  I thought I'd break radio silence with a pretty cool project.  Last week I was asked if I'd be interested in doing the cover illustration for "Reverb", a music insert in the "Seattle Weekly" and I was all like, "Uh-huh."  My eloquence, I'm sure, contributed greatly to their confidence in my abilities.

The feature is an interview of Hisashi Iwakuma, a new player on the Seattle Mariner's team.  The interview is conducted by John Roderick, a Seattle musician (if you're not familiar with his music you might recognize him from his duet with Jonathan Coulton on "Nemesis") and columnist for "Reverb".

Rather than a traditional interview, though, Roderick answers some fairly straightforward questions with some hilarious, long-form answers that sometimes disregard the original question completely.  The style and tone of the interview are Gonzo-esque, and I was asked to create an illustration that reflected the style and paid homage to the artwork of "Fear and Loathing in Las Vegas" and the legacy of Ralph Steadman.  And I was all like, "Uh-huh."

SO MUCH FUN.  I love (almost) every kind of illustration.  But this project is a great example of my favorite kind: Funny, dark, and detailed.  I love drawing faces, expressions (particularly the eyes), hair, teeth, glasses, and smoking.  I'm not sure why, but I've always loved to draw people smoking.  It's a kind of old-fashioned characterization, I guess.  But since no one smokes anymore, I rarely have the opportunity.

Favorite part of this illustration: Probably the hair.  Hair is a great way to add both texture and depth to an illustration.  God only knows how many individual hairs I drew for this one, but it was worth it. 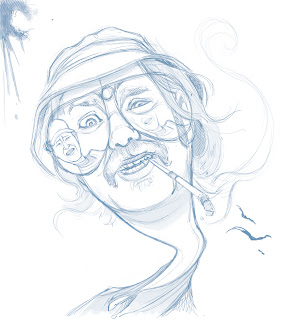 Posted by Noah Kroese at 7:47 AM No comments: 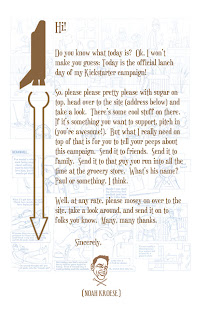 Please check it out!
Posted by Noah Kroese at 6:08 AM No comments: