Posted by Noah Kroese at 9:57 AM No comments:

This is just a fun little sketch I did this weekend.  I'm still having fun sketching the traditional way and I may try to do it on a regular basis, time permitting.  There's a certain level of charm in a sketch on paper that I still can't quite replicate digitally.  There's more energy in the lines, good texture, and it's not as infuriatingly clean (something I never thought a confirmed clean freak like myself would ever miss).

I don't want to over romanticize working on paper, though.  There are a few disadvantages and working in the sketchbook lately has reminded me of some of them.  For instance, I had actually forgotten that using a pencil on paper actually creates two marks: the graphite line itself and the groove created in the paper from the pressure of my hand.  Only one of those two marks erases, though.  If you look closely you can see areas where I erased over and over but the indentations remained (around the kitten and around the robot's head, just to name a couple).

I didn't make this mistake with this drawing, but I've done this about a billion times: I'm erasing a section of the drawing aggressively and I don't have the paper held down well enough.  The eraser grabs the paper and it wrinkles the crap out of the whole thing.  At this point, I can try to meticulously bend all the creases in the opposite direction and try to flatten it out again, or I can just start over.  It's one of my least favorite aspects to drawing on paper.

Anyway, this one was great good fun. 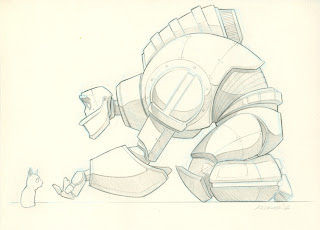 Posted by Noah Kroese at 4:13 PM No comments:

Here are the last two of the sketches I did last week while traveling (BTW: am I the only one who feels like the word "traveling" should have two "l"s?).  The first (pirate), was pretty much just drawn because I love pirates and have since I was little.  I have seen relatively few fat pirates, though, and so I thought I would create one.  I imagine there just weren't that many fat pirates, given the rigors of the job and all.  Sailing.  Stealing.  Scurvy-having.  You know.  Rigors.

The second sketch is kind of an emotional self portrait.  I often feel very uptight.  Nervous and uncomfortable with myself.  Not unlike the slightly overweight, "Star Trek" loving middle school kid I once was.  So this drawing was a fun exercise in self-lampooning.  Enjoy! 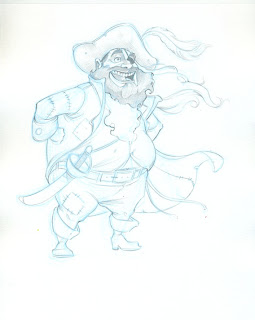 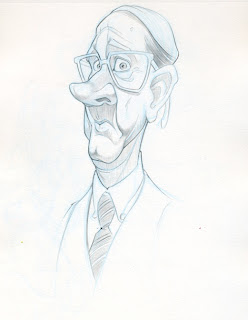 Posted by Noah Kroese at 9:42 AM No comments:

I came up with several potential ideas and narrowed it down to the two I thought were the strongest.  I decided to go with the ideas I thought were conceptually strong instead of moving ahead with ideas I thought would be more fun to draw (lots of detail, fantastic elements, etc.).  I think I would have had more fun if I'd gone the other direction, but c'est la vie.  I still had fun on these.

The first is a parody of "Wall Street" (the original 1987 version).  My version features Lex Luthor in the role of Gordon Gekko.  I love the dress shirt with the white collar and cuffs, which nicely characterize the era and the personality.  It's a little odd having one fictional character play another, but I thought they paralleled each other perfectly.  Given some of the recent events and the results, I thought this would be a nice send up.  I guess my political cartooning instincts die hard.  Ultimately, I decided not to move ahead with this idea because it was too simple.  I knew it wasn't going to be as interesting to draw or look at in the end, so I went with the second concept.

Idea number two, which eventually won out, is a mash up of the Batman series and one of my favorite comedies of all time, "Arthur" (the original).  If you haven't seen "Arthur", it's great.  It's about a drunken billionaire (played brilliantly by Dudley Moore) and how he fills his life.  It also features John Gielgud as Arthur's long-serving and sarcastic butler.

I thought Bruce Wayne would be a great stand in for Dudley Moore.  He's rich, he has a loyal and wise servant (not as foul-mouthed as John Gielgud, unfortunately), he lives in a mansion and he has a flashy ride.  I also like the idea of Bruce Wayne getting to have a little fun.  He seems tense.

All in all, a fun little side project. 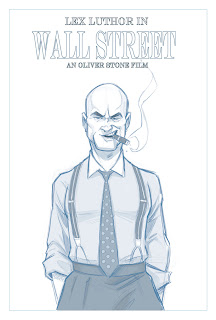 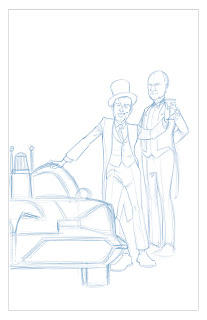 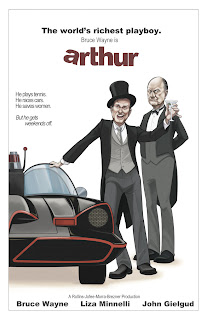 
Here are two more sketches from when I was traveling last week.  I liked the little king idea (it was based on a comment I heard regarding a bill in Congress that was all show but without much content) and it was fun to draw.  I didn't think the other sketch was particularly interesting, though, so I didn't bother penciling it.  Generally speaking, for me the idea has to start out pretty strong in order to maintain my interest.  I didn't think there was anything particularly appealing in the second sketch, though, so it fizzled. 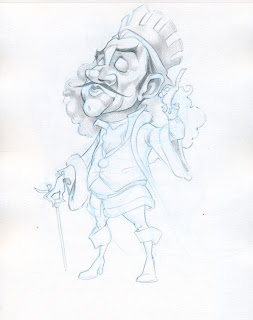 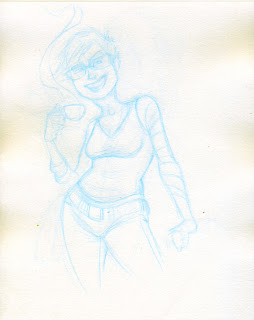 Posted by Noah Kroese at 9:26 AM No comments:

For the past week I've been away on business where I did not have access to my tablet.  I did have access to an old-fashioned kind of tablet called a "sketchbook" wherein the ancient ones used to make marks on a surface with various implements like pens and pencils.

It's always great to get back, however temporarily, to working in a sketchbook.  The texture and energy of working in a sketchbook is, in my opinion, still somewhat lacking in the digital arena (the caveat here is that I've done no research on programs or plug ins that might mimic that feature of sketchbooks).  At any rate, it's still pretty enjoyable.

Here are the first two sketches.  Other than some stylistic similarities, I can't say there's much of a theme to this collection of drawings.  When I sit down to draw, I want to have fun.  For me, that means making up characters with exaggerated features, a lot of expression, and probably some kind of crazy costume. 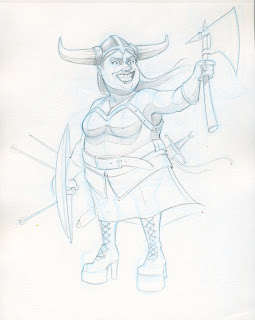 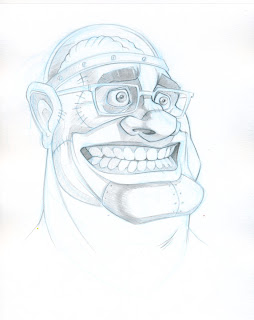 Bookpeople also asked me to come up with a few designs for a gift card.  Here are some of the options I sent.  The bottom image is a set of designs for some print ads.  Super fun. 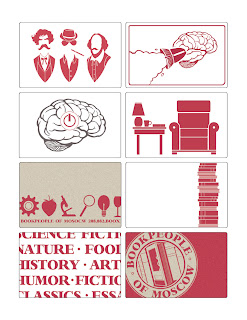 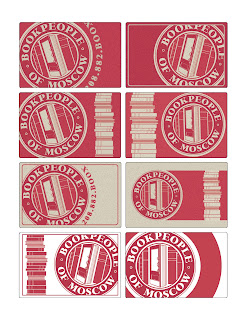 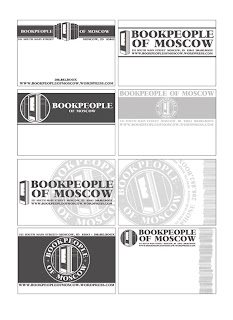 Posted by Noah Kroese at 9:41 AM No comments:

Eventually, the logo was finalized with this arrangement of elements and colors.  The color of the side books and rings is taken from one of the colors of the interior of the store (a warm-gray), which I think nicely accents the primary logo color.  I'll include a black and white version as well.

But it was still fun. 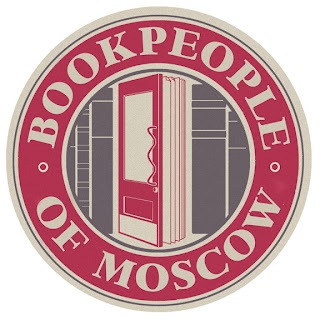 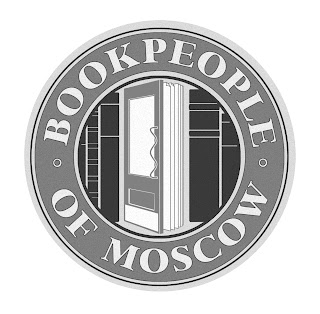 Posted by Noah Kroese at 9:33 AM No comments:

The design that won out was a traditional representation of the front door with pages behind.  The color of that design was also selected.  Next came color variations and a few experiments with various design elements included on the spines.

Posted by Noah Kroese at 9:21 AM No comments:

So, here's the rundown: There's a bookstore here in Moscow called Bookpeople.  To say this bookstore is beloved would be an understatement.  Along with being a great place to find absolutely any kind of book, it's also a community focal point and a local fixture.  Recently, a new set of stewards took over and decided to redesign things.  As part of that effort, I was asked to create a new logo for the store.

On top of being glad to contribute, I also felt a decent amount of pressure with this request.  Any establishment that's local, well-liked, and has a legacy like that of Bookpeople is going to present a tricky design problem.  Distilling the essence of a business or organization into a few simple graphics is always a complex endeavor, but to do this for a business with which people already have an established emotional connection is all the more complicated.  Luckily, having lived in Moscow for 12 years now, I am one of those people who feels an attachment to the store.

So I started like I always do: by thinking of the business, what it looks like, what it provides (in every sense), and what it means to people.  One of the thoughts that came to me was that the front door of Bookpeople, which was going to stay the same, is aesthetically unique and has a decent amount of emotional resonance.  I think it exudes a kind of warmth, not only because of the way it looks but also because of what it represents to people.  I walked down to the store and took a few photos of the front entrance. 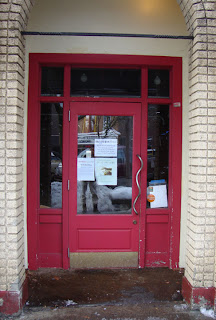 Including the front door as a graphic element in the logo seemed like a great starting point.  It's familiar to people, it's unique both in its color and because of the handle, and the door itself opens onto a whole host of things, both literally and metaphorically.

Here's the first set of designs: 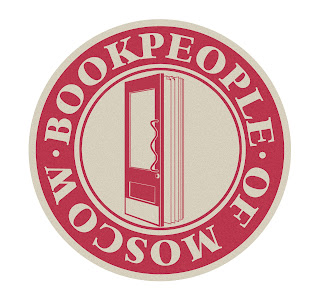 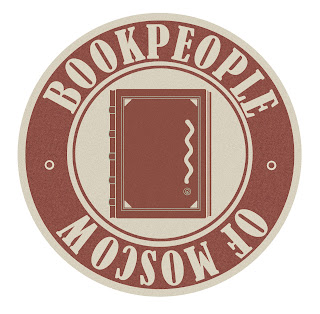 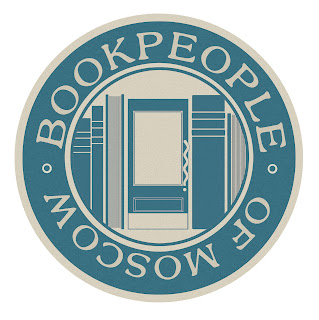 The circular format was by client request, and I think it's a great way to have a versatile, self-contained and clean logo.  I tried several different colors (including the one that made the most sense to me, which was the actual color of the front door), using the beige color of the bricks as a background.  I also tried multiple fonts.  I was looking for a font that had a classic look and feel to it without being too much of a parody or pastiche.  These were the results.
Posted by Noah Kroese at 9:15 AM No comments: