In November, right around Thanksgiving, my girlfriend Kym Dahl and I decided we'd like to make our friends and family something special.  We wanted to create something that would be fun and different and, fingers crossed, memorable.

Eventually, we decided we would create a board game.  A Christmas-themed board game.  We also thought it would be great if the game pieces were paper craft figures.  Together, we designed a trivia game based on our favorite Christmas movies, books, TV specials, etc. 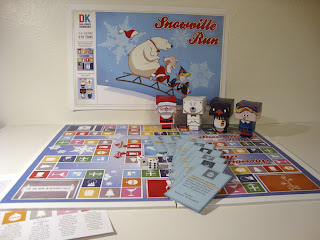 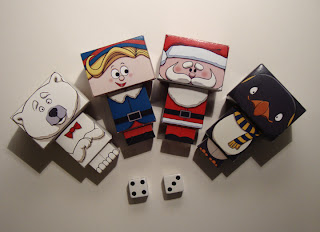 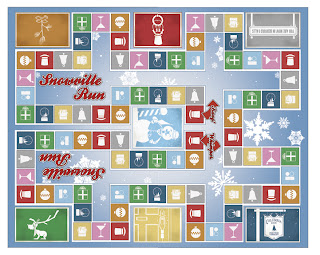 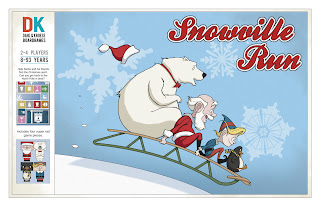 I think, after a good deal of self-induced amnesia, the game met all our expectations and was liked by everyone.  Of course, I specifically told the recipients to lie if they didn't like it.  In all, we made only eight of these.  Eight game boards, over 30 paper craft figures cut and assembled by hand, and 800 trivia questions.

And lo, we called our Christmas creation "Snowville Run".  And now we are tired.  Tired and happy.

Cheers.
Posted by Noah Kroese at 3:57 PM No comments:

Just under a week ago now I was asked by "Lindy's Sports Annual" (baseball edition) if I'd be interested in producing a couple of illustrations for the upcoming issue.  I'll end the suspense and just tell you: I said "yes".

The illustrations are slated to accompany two stories: the first about Red Sox fans and their proclivity for complaining regardless of their team's success and the second about the terms of Albert Pujol's new contract with the Angels (specifically, the fact that he'll be 42 by the time that contract expires and possibly past his prime).

I'm pretty happy with the way both turned out, particularly given the relatively short turnaround time.  Of the two, I had quite a bit more fun with the Red Sox fans illustration.  The Pujols piece was fun, for sure.  Adding details that (hopefully) help to inform the narrative slant and exaggerate the caricature is always great.  In this case, I drew Pujols with his pants worn far above his waistline and with Velcro shoes (on top of the gray hair and lined face).  But whether or not people will recognize the face as that of an aged Albert Pujols remains to be seen.

The reason I enjoyed the Sox fans illustration was that I wasn't actually modelling the characters' faces on anyone in particular.  I set out to represent a number of demographics (I figure any MLB team probably has every single kind of human being among their fan base) which meant I could draw four completely different faces, expressions, sets of clothes, bodies, etc.  And since variety is the spice of life, and since the spice must flow, there was a whole mess of fun details to draw.

Other items: I tried to keep the composition relatively interesting.  I chose green for the background not only because "Lindy's" typically requests free-standing illustrations (without a formal background), but also because green seemed like a good fit and not too distracting.  I figured green (the color many associate with jealousy or envy) hits close enough to the mark in terms of the sentiment being portrayed here.

Ok, I think that about wraps 'er all up. 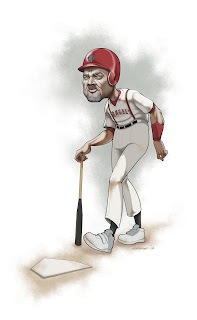 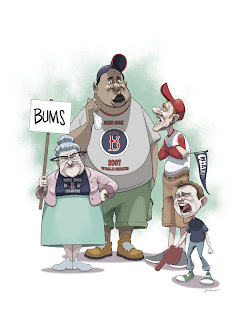 Cheers.
Posted by Noah Kroese at 3:43 PM No comments: