And from the flesh of that last concept were borne these two thingies:

"What gets put into the frame, then, if it isn't the composer?"  I asks myself.  Well, the concert's selections are essentially Christmas incarnate.  Many of these songs, even if you don't recognize the titles, would be instantly familiar to you.  Probably familiar to you in the way the smell of cinnamon is familiar, which is to say that, like music, the physical presence/reality of the thing is greatly augmented by the emotional memories it contains.

Along with symbols, pictograms and silhouettes, I've also been experimenting some with composite images comprised of those visuals.  It irks me a bit to see oversimplification (this, he says, after touting the beautiful simplicity of symbols).  Seriously, though, most things are way too complex to sum up with a single visual element.  So...why not use multiple images?  That was the genesis of this first derivation.

Two thoughts about it:  One, the candle under the hat makes me nervous.  It's a symbol of a candle and a symbol of a hat.  These things don't exist except as 2-dimensional representations of objects.  But still, that's an unsafe place to put a symbol of a candle.  It could start a symbolic representation of a fire and ruin the holidays for us all.  Second, the cassette tape is my favorite element.  My favorite Christmas music was a mix entitled "A Very Special Christmas" (on cassette tape, of course), which was a mix including the likes of Sting, Run-DMC, Bryan Adams and Stevie Nicks.  Boo yeah.

Concept two is a wreath made of frost.  Few things are as beautiful and graceful to me as frost.  The correlation between frost and choral music seemed perfect in my head, even though it deviates from the more simplistic silhouette-type images.  Ultimately, this poster was chosen as the final for the December concert. 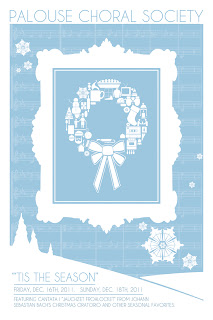 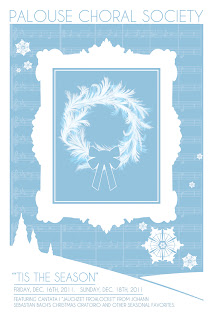 Oh, did you think we were done?
Posted by Noah Kroese at 2:53 PM