Whew.  Glad I got that off my chest.  I think we all feel a little better now.

"Well," you might be thinking to yourself, imaginary reader of this blog, "I accept your apology for the post hiatus, but what exactly have you been doing with yourself lately?"


I'm glad you asked that.  Because unless you read the title of this post, you'd have absolutely no idea.  I've been working on any number of things.  One of them (as evidenced by the previous post) is trying to learn animation.  It's not a speedy process.  The learning curve is steep and it's extremely time-consuming.  I'm currently working on the second animation at the moment.  Apparently, it's healthy to feel out of your comfort zone as this feeling is indicative of growth.  I guess I'd just forgotten how often growth and the feeling of incompetence are synonymous.


One of my other projects has been, as the oh-so-germane title points out, concert posters for The Palouse Choral Society.  I met with the PCS team earlier this year to talk about the logo and the posters.  Like the logo project, this project has seen a pretty significant evolution between the initial concepts and the finished posters.  That change is usually an interesting one to watch.  It's even more interesting when you're right in the thick of it.

Here's the thing:  Music is extremely visceral.  Describing music can be a daunting task.  You can describe the lyrics or the notes in a concrete way, but it gets tougher to describe a melody (even if you specifically list the notes) and explaining the emotional complexity of the music is a handful for anyone.  That's probably why the "Draw Music" assignment is so ubiquitous in early design classes.  Striking the right emotional chord to visually describe a specific kind of music is hardly a science.  Add to that the goals of the organization itself and the plethora of opinions from everyone involved and you'll probably end up with a project that changes quite a bit over time.  Which is exactly what we have here.

Up front, we have three concepts.  One is based on the work of Alphonse Mucha.  I spent quite a while obsessing over the work of Mucha.  I've always been a great admirer of the craftsmanship and its graceful figures and exacting lines seemed like a good fit for choral music.


Concept two is based on an illustrated manuscript.  Because of their painstaking detail and spiritual affiliation, the illustrated manuscript also seemed like a perfect visual representation for the concerts.  However, after spending quite a while on this concept, I took a step back and realized I hated the damned thing.  So this one was never presented as an option.  I think it's ugly and amateurish, even for a concept.

The third concept came from a recent fascination with silhouettes, symbols and pictograms.  I like the simplicity and elegance of these kinds of illustrations.  More than that, though, I like the potential for humor in them.  They're so often used as serious means of communication (traffic signs, for instance) that putting them in other contexts seems funny (to me, anyway).  So I applied that idea to the composers responsible for the music in the concerts. 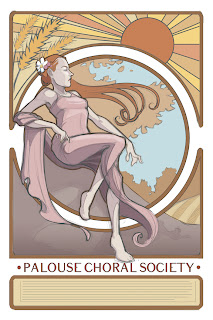 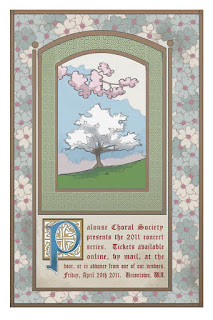 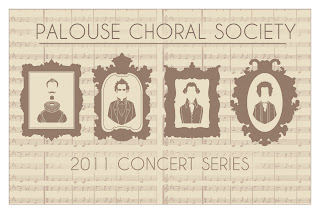