The Prichard Art Auction is an annual event that raises much needed funds for a very fine art gallery.  As an undergraduate, I helped out in the Prichard as a show installer.  I helped put together quite a few shows, including one by Andrew Goldsworthy.

It's SO COOL to be able to work on these posters.   1.) It's an organization I love, not only because of the history I have with them, but also because of the phenomenal work they continue to do.  2.) It's staffed by phenomenal people I genuinely like.  3.) It's a great cause.  It literally makes our town a better place to live.  4.) There are no constraints on the posters.  That stands to reason, given that they're artists and are used to advocating for creative expression.  But even with conditions like that, it's easy to get prescriptive about an important event.  They don't, though.  They seem to enjoy the surprise and the variety (remember last year's caveman poster?).

So, here's what I presented to them.

The first is based on art as represented by mediums (not the Dionne Warwick variety).  I've always loved the tactile elements of art (even more so now that I work digitally).  I love the smell of oil clay and paint and wood shavings.  This concept is an ode to those mediums.  I also forgot to mention that this year is the 25th anniversary of the gallery, which is the "Silver Anniversary".  So the text is also a reference to that.  It's also an homage to "Madame X", a famous painting by one of my favorite artists of all time, John Singer Sargent.

Concept two: Stemming from one of the Prichard's missions, which is to champion artists, I drafted up this idea.  In this scenario, though, the auction acts as the arena in which people can be champions for the gallery itself.  Kind of like being a champion for a champion.  The background of the banner is based on some of the Prichard's design schemes.  Ultimately, though I like the concept, I think it's a little dark for an event where people are supposed to be having a nice evening.

Concept three:  My goal here was just to be irreverent (in spite of my reverence for the gallery).  I suppose I wanted to shake off the visual expectations of a poster for an elegant event (self-imposed expectations, I should note).  Art is many things to many people.  For me it's fun.  It represents the lust for life I try constantly to maintain (and seldom do).  The gallery is a great embodiment of this outlook.

The quote on this one is by a poet named Mary Oliver, who wrote my favorite poem ("Wild Geese").

One of these concepts has been chosen, but I won't tell which until later. 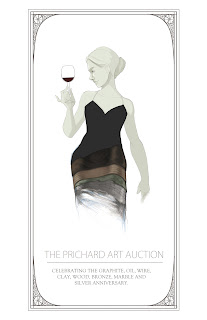 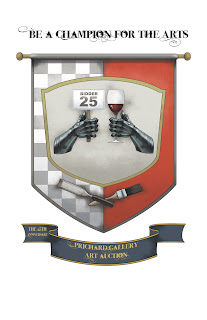 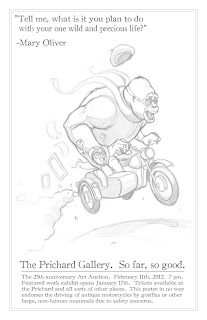