They say it's next to godliness 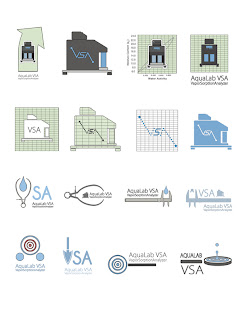 Decagon has an isotherm generator called the "Vapor Sorption Analyzer". On the outside chance you're not sure what that is, the VSA provides data on the water activity of certain products, which can effect expiration dates, shipping, product stability, etc.

There's currently some software being developed for the VSA and I was asked to come up with some concepts for the software icon (along with the splash screen which I'll get to later). Here are the results.

Yet again, I found this project to be more fun than it probably should have been. And I'm not exactly sure why, but I'll guess:

1.) I like the cleanliness, efficiency and utilitarian nature of logo and icon work like this. I'm sure there are any number of people familiar with my work who would say that my illustration, regardless of subject matter, is cleanliness incarnate. Although I won't argue that my work is pretty clean, this kind of logo work is an extreme version of that. And it's pretty fun to see how far you can push something.

2.) I'm a huge, gigantic nerd and doing design work for a company that makes scientific instruments is the closest I'll ever get to being a scientist (which would be cool). I've always been fascinated by most things sciencey (rock crystals, geodes, potato clocks, etc), but I'm lacking in the science-brain department.

3.) I love a challenge. The last logo design project, in terms of difficulty, was like pulling teeth. And, that having been said, I'm like Bill Murray in "Little Shop of Horrors" (who loves getting his teeth pulled). For me, there are few things as satisfying as coming up with a bevy of ideas in an attempt to distill a complex issue or idea into a manageable graphic.

The disclaimer here is that I genuinely believe there are few to no logos that can fully express a complex issue. Logos are necessarily abbreviations. They're just a starting point.
Posted by Noah Kroese at 5:00 PM