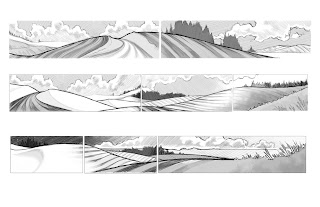 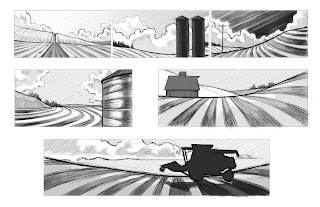 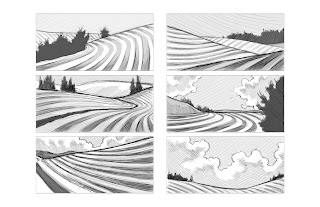 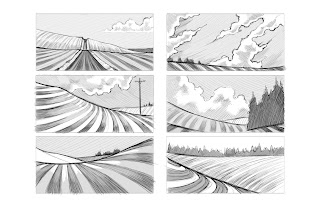 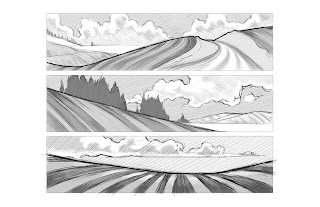 I kind of grew up outside. Not in a Jungle Book type way, but I spent a lot of time playing outside as a kid and I still really enjoy the outdoors. I'm also an illustrator. So it's a little weird to me that I don't do more landscapes. I usually enjoy them, I find them interesting and challenging, and people tend to respond positively to them. Why don't I do them more often?

My theory is that I'm just MORE interested in the things an elementary school or middle school boy would be interested in (again with the zombies, superheros, monsters, etc.). But all those characters need landscapes to walk around in, so I suppose it behooves me to hone my landscapabilities (oh, yeah, that one's going on Urban Dictionary).

Of course, this project has nothing to do with any of that. What follows are the concepts for a set of large landscapes that are likely to end up in the office of a client. These will be big (anywhere from 2' x 4' to 2' x 7').
Posted by Noah Kroese at 3:59 PM No comments: 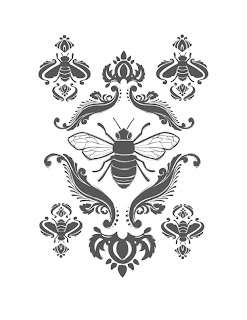 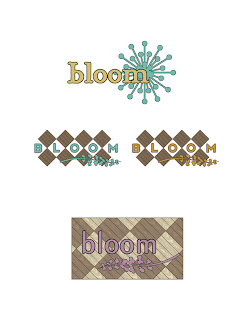 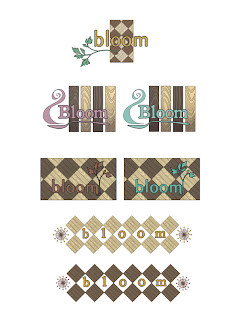 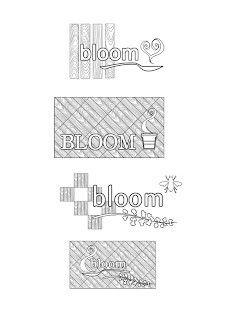 Here are more logos, as promised in the title of this post!
Posted by Noah Kroese at 3:57 PM No comments: 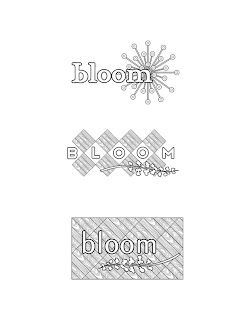 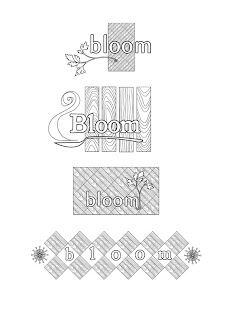 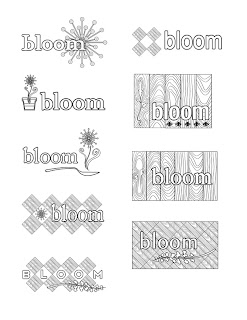 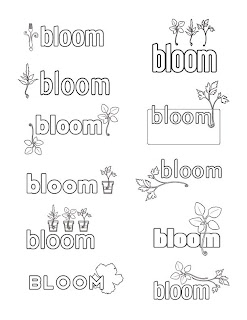 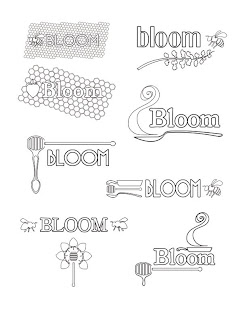 I was commissioned recently to do some logo work for a restaurant. Here are the initial versions of the logo. The process is ongoing but I'll be sure to post the final version eventually.

I actually really like logo work. It doesn't seem like something I would enjoy. Or maybe, given my proclivity for enjoying technical illustrations, just the opposite is true. I'm a big fan of precision and cleanliness, both of which logo work tends to have in spades. But it doesn't really involve much complicated illustration, detail, zombies, samurai, or aliens.

I suppose what I really like about logo work is the challenge of distilling an idea, thought, or feeling into a graphic that communicates the complexity of said idea. It can be tough. People tend to have emotional associations with just about every word and image in existence.

It's also challenging because there usually have to be dozens of variations or different logo ideas created before you find THE ONE.

So, in summation: Noah gives logo work thumbs up.
Posted by Noah Kroese at 3:44 PM No comments:

Here's a quick scene from the video I mentioned in an earlier post. It's a new approach for me, but very enjoyable.
Posted by Noah Kroese at 9:13 AM No comments: 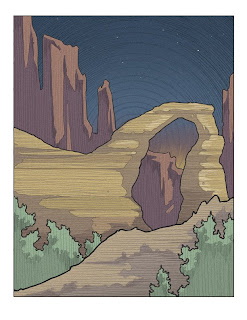 This here's a concept for a series of landscapes I'm working on currently. Ultimately, the project has moved in a different direction and this one will not be included. But I think the style is interesting enough to share. Not that it's my invention or anything. This kind of etching or woodblock print-style aping is nothing new. But for me, it has a very nostalgic appeal to it. I'm not sure why.
Posted by Noah Kroese at 8:56 AM No comments: 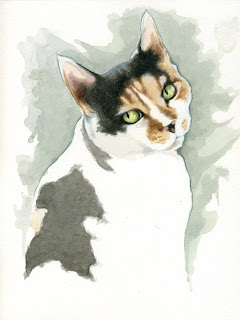 This is a second private commission. It was done the old fashioned way, with watercolor and colored pencil on paper. As I said in a previous post, I still enjoy working in traditional mediums but I don't often have the time to do so.

I've been thinking about the difference bewtixt the two methods for a while now. I think working traditionally allows you to be closer to the drawing itself. You have to mix the colors and touch the paper. You also have to be much more invested in the illustration. If you screw up, you either have to figure out how to cover it up or you have to start again. I think this makes you think much more about the illustration you're working on. It makes it more about the process and the actions involved therein.

Digital illustration, in my opinion, streamlines the process. Without having to mix the colors myself, I can move faster. I can re-format the drawing I'm working on without having to start over. I can correct mistakes instantly. I can modify an illustration at any time, even after I think it's done. This makes the whole process much faster. And that, subsequently, allows me to focus on the story more. It's something I've always wanted to do. But creating a full story (with the detail and precise standards I demand of myself) on paper is a demoralizing amount of work. Working digitally opens up new arenas for me.

And I likes it.

Cheers.
Posted by Noah Kroese at 8:45 AM No comments: 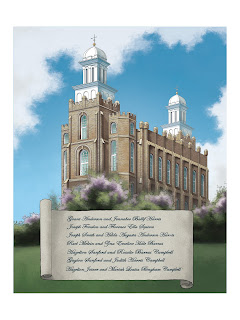 A private commission.
Posted by Noah Kroese at 8:42 AM No comments: 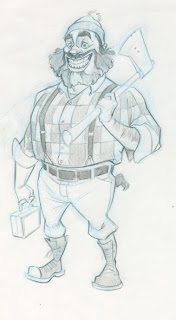 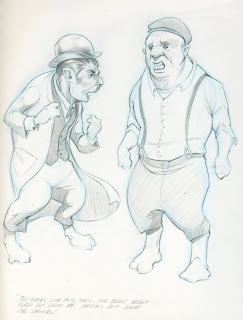 This isn't something that happens often, but I'm going to open up the sketchbook. In part, it doesn't happen very often because I just don't have the opportunity to work in my sketchbook on a regular basis. I'll be honest: I miss is sometimes. Digital illustration is phenomenal and I wouldn't trade it. But there's still something really exciting about working on paper.

The other reason I don't usually let people peer inside the sketchbook is because I'm a complete and utter perfectionist. It's a battle I've been losing for a long time. I like to work at a drawing until I'm completely satisfied in every way possible. And if a drawing doesn't reach that stage, I pretend it doesn't exist. But, like the one guy in the elevator with you or the guy at the urinal next to you, however much you pretend he's not there, there's still the awkward acknowledgment of his presence and attempt to ignore.

Well, I have deemed these sketches worthy of display. One is based on the H.G. Wells story "The Island of Dr. Moreau", which I recently re-read. The other is just a cartoony sketch of a logger. One of the details that I have yet to figure out digitally is how to give my drawings the sense of energy and life they have on paper. Maybe this comes from the fact you can see sketch lines and erase lines. Whatever the case, for me there's something very appealing about this format.

Cheers.
Posted by Noah Kroese at 8:32 AM No comments:

And now for something completely different... 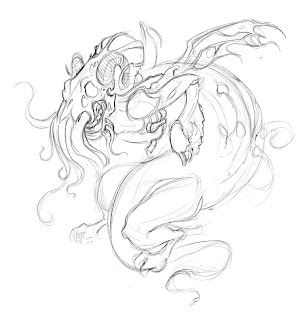 I've been meaning to read some H.P. Lovecraft for years. A couple weeks back, I finally went down to the library and picked up a book of short stories. It's phenomenal. Basically, everything I was hoping for and more. On a side note, it's interesting to read and see how much of the material was re-tasked for "Night Gallery", the phenomenally campy Rod Serling horror show with amazing character acting and special effects that rival any middle school play. One of the stories, "The Call of Cthulu", is the tale of a massive demon who I guess lives under the sea (with Sebastian and Ariel, though I imagine they're don't interact often).

Cthulu is an oft-visualized character. I think part of it has to do with the fascination with the story itself and part has to do with Lovecraft's literary descriptions which usually describe monsters as "Too horrible to imagine" or "You'd go mad if I told you". I think this is kind of clever and simultaneously a bit of a cop out. It lets your imagination fill in the blanks which works well only if you have a good imagination. It also lets the author off the hook for filling in physical details.

So I thought I'd take a whack at it. It's an interesting challenge to try to bring something new to well-trodden ground. Subject matter-wise, it isn't often I'm asked to do something like this and I enjoyed the brief tangent. It will likely remain a sketch forever, though, since I don't really have the time to finish it.

Unless someone wants to commission me to do so.

I hereby offer my sincerest of apologies for being remiss in posting in the last two months or so. There are explanations, of course, but mostly I've just been lazy about it. The last project I had involved video illustrations and posting the individual illustrations out of context wouldn't have been very interesting.

I've also been working on a book. It's a project I've been incubating for over five years and I'm just now beginning to bring it to fruition. It's big. It's rich. And it's ambitious. But for now, I'm not going to post any of it. In my mind, it's too premature for display. At any rate, most if not all of my free time and energy are devoted to this project which is another reason my blog has been on hiatus. I'll try to be better about posting, though.

Blah blah blah. Enough talk. More illustrationing! This one was the card I made for my girlfriend for Valentine's day. The inside said "Happy Valentine's Day to my princess unicorn fairy sparkle princess." She got a good laugh out of it, which made it a resounding success.
Posted by Noah Kroese at 8:05 AM 1 comment: