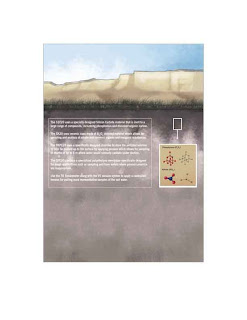 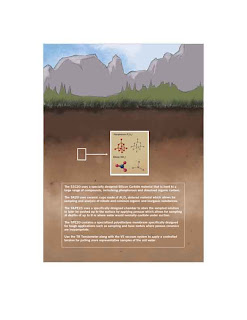 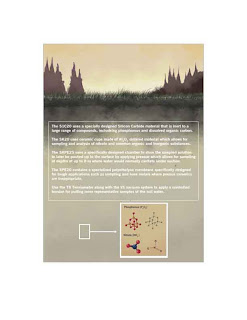 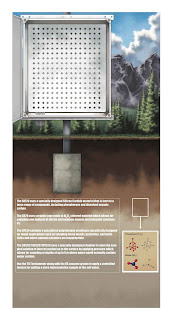 Here's the last of the display panels. It's a little smaller than the others (2' x 4'), but the level of detail was about the same so not much time was shaved off. The white box is an instrument housing (when you have sensors in the field the housing protects them from the elements). The first three images are concepts, the last image is the panel in its final incarnation.
Posted by Noah Kroese at 8:03 AM No comments:

Here's the third panel in this set (I have one additional panel to do after this one). This one is by far my favorite, which is a surprise. In some ways it makes sense: The most recent panel should be the most technically proficient. However, making corn (an extremely ubiquitous crop here in the US) interesting was a challenge. Personally, I think I did a decent job of it. The colors are rich, the composition draws the viewer's eyes around the canvas, and there's enough detail to make it worthwhile to take a second look.

As always, now that I'm at the end of this project, I'm just beginning to feel competent enough to do justice to the illustrations. But such is life. Overall, I'm really happy with the turnout.

-Noah
Posted by Noah Kroese at 2:30 PM No comments:

For the trade show panels (did I mention the final versions are 24" x 72"?), the rain forest was chosen. This was partially for visual interest and partially to show the versatility of Decagon's sensors and devices. I think it was a good choice. Here's the final. What you're looking at is around 50 hours' worth of work. Worth it, I think. Drawing at this scale provides some interesting challenges, and I'm always up for those.

This was well-received at Decagon, which was a big relief. I've been drawing for as long as I can remember and doing client work for perhaps ten years. Even after all that time, I still get anxious about showing a final piece to a client. That's probably a good thing. It prevents me from cutting any corners and typically leads to client satisfaction.
Posted by Noah Kroese at 9:04 AM No comments: 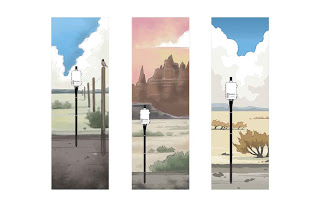 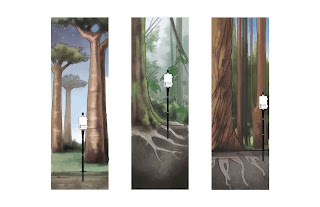 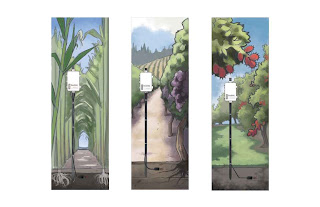 Decagon has a large show coming up in October. They asked me to work up concepts for three panels, each showing a different environment against which they will display various sensors and devices. They asked for three kinds of environments: a forest, a range land and some kind of crop.

I worked out three concepts for each environment. For forests, you'll see a baobab tree forest (Madagascar), a rain forest (Brazil), and a redwood forest (California, USA). Crops: Vineyard (Italy), corn, and Rambutan (a spikey fruit grown in Malaysia and Indonesia). The range land concepts were all based on images from various locations like Wyoming, USA and Australia (I can't remember the exact locations).
Posted by Noah Kroese at 8:54 AM No comments:

You asked for it 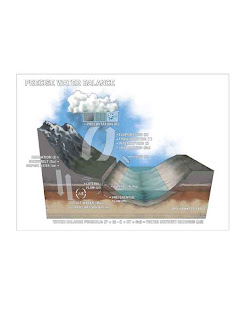 For years now, my millions of adoring fans have been screaming for a water balance technical illustration. Well, my friends, here you are.

Commissioned by Decagon Devices, Inc., this illustration shows the various movements water might make in a given area. Eventually, it will wind up in one of Decagon's catalogs.

I love this illustration. Seriously. There's something so satisfying and exciting for me about this kind of work. For me, a lowly illustrator, some of this information is new and downright baffling. When there are large amounts of information to be conveyed, the illustrations that accompany said information can be a bit dry. So not only do I enjoy being exposed to new information (I think they call that "learning"), I also love the challenge of making information like this visually exciting. Ok, maybe "exciting" is a bit of an exaggeration for most people. There won't be a warning beneath this illustration for people with pacemakers, but I think it will be interesting to people. And it was exciting to ME. So...bonus.

I was wondering the other day about my proclivity for technical illustration. It seems like most people wouldn't get this excited. I'm not sure if this has anything to do with it, but I realized recently that I'm a second-generation technical illustrator. My grandfather worked on technical schematics and illustrations. I have one he did for Hughes Aircraft. Is that cool, or what?
Posted by Noah Kroese at 8:43 AM No comments: 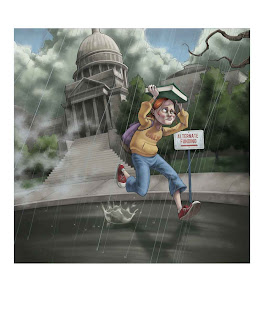 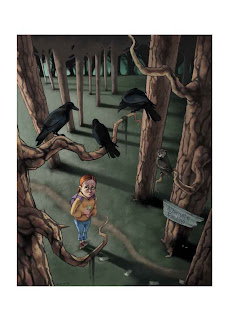 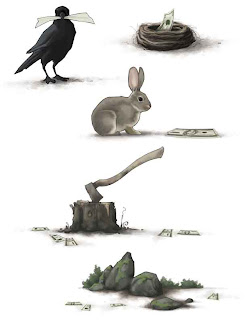 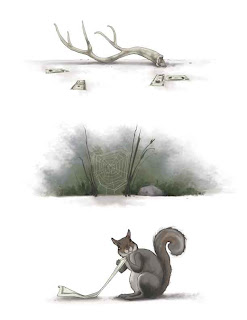 The good people at "Programs and People" were nice enough to allow me to illustrate both the feature article and the cover, which I was super excited to do. As you'll see, they chose the concept of the little girl in the woods. All of the art continues with that theme.

I'm not sure if I've brought this up before, but I used to paint with oils years ago. It was the focus of my undergraduate show (large scale, photo-realistic portraits). I loved the depth of color and richness oil provided. But when I decided I needed to make money for things like rent and food, oil just wasn't practical anymore. Illustration means deadlines and oil was just too slow (and I never got the hang of acrylics). I also always had trouble creating sharp, fine lines with oil. I shifted over to watercolor, ink and colored pencil for years, but I always lamented the lack of depth.

The tablet provides the depth of color of oil paints and the fine, sharp lines and control of ink and pencil illustration. These illustrations are great examples of that versatility. And, with the increased speed, I'm able to add more detail and more visual interest to my work.

I always hope for my illustrations to accomplish a number of things:

-Please the client.
-Satisfy myself.
-Entertain and fascinate the audience.
-Create enough visual interest for people to want to look more than once.
-Be evidence that I love what I do.

I think these illustrations hit most (if not all) of those goals.

Cheers.
Posted by Noah Kroese at 8:28 AM No comments:

The Concepts Strike Back 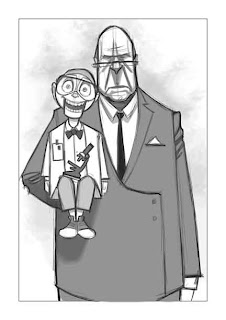 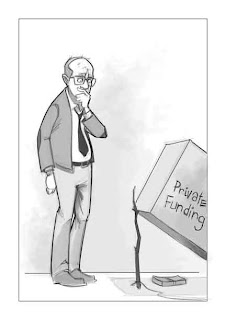 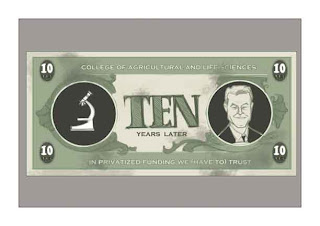 This is the last of the Programs concepts. Search your feelings. You know it to be true.
Posted by Noah Kroese at 8:26 AM No comments: 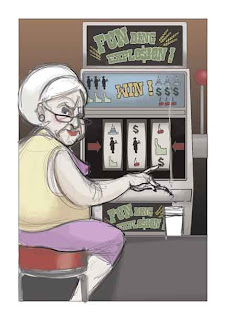 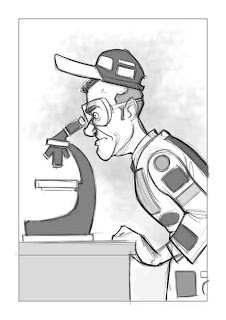 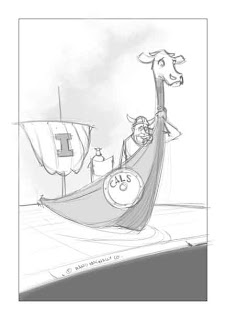 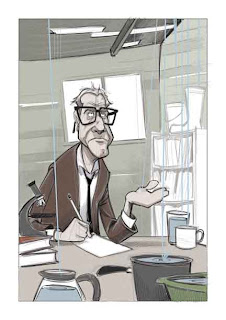 Posted by Noah Kroese at 8:24 AM No comments: 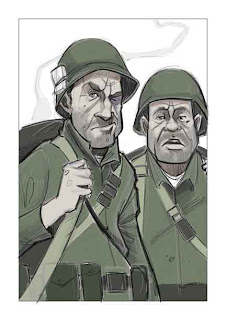 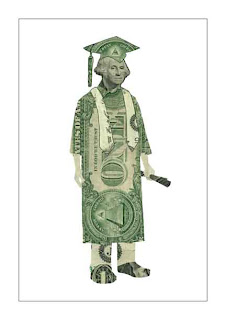 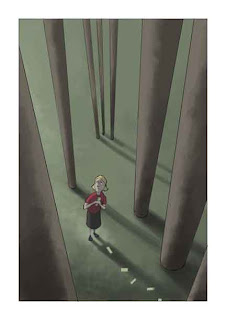 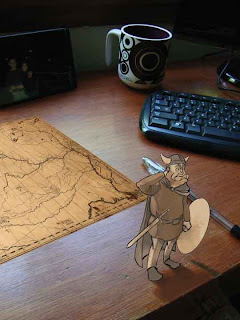 This set of concepts is for "Programs and People" magazine. The feature story in the magazine this year deals with budget difficulties faced by the College of Agricultural and Life Sciences at the University of Idaho, particularly with regards to the reduction in money from state and federal government. From there, the story goes on to describe the uncertainty in the programs' future.

As the story is multi-faceted, it was pitched to me from several angles. This is part of the reason there are so many concepts in this set. For the most part, though, I like to use what I call the "shotgun approach" at the outset of a project. Basically, it just means interpreting the story/project in as many ways as possible and coming up with a wide range of visuals to match.

-George Washington Graduate: This one is meant to depict the influence money has on various college programs and departments. The concept isn't as illustrative, but I like that it's visually very different and it was fun to put together.

-Soldiers: This concept was based on the various beleaguered parties within the college. Running a department at an institution of higher learning is difficult in the best of times. With severe budget constraints it becomes exponentially harder. These characters are based on Willie and Joe, the consistently exhausted Bill Maulden characters from his Stars and Stripes tenure.

-Little girl in the woods: Based on the idea that pursuit of alternate funding is leading the department into unexplored and unfamiliar territory, this Hansel and Gretel-esque concept I think nicely captures the emotional content of the issue.

-The Viking (or Vandal) on the desk: Also based on the "unexplored territory" vein, I like how different this one looks. Working digitally allows me so many more possibilities, which is exciting.

I'll post the concepts I liked first, then the remainder in two other sets.
Posted by Noah Kroese at 8:02 AM No comments: