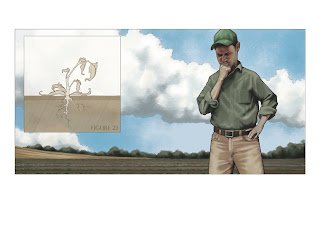 It's been almost a month since my last post! I've been drawing like a mad man (assuming that's not a redundant statement), so I barely noticed how long it's been. I'll try to be more diligent about updating the blog, though.

First, the final version of the web art for Decagon. In the post directly preceding this one, I described the project and posted the four concepts. One was chosen and brought to what I think is its final incarnation.

I put an intense number of hours into this project (more than I care to admit), but I was looking for a very specific aesthetic and feel. Before beginning, I was aware that an illustration with this subject matter can easily stray into overly-sentimental territory. My goal was to create an illustration with rich but natural looking colors, a background that suggests a sprawling almost epic landscape, and a character who looks pensive and worried but not tortured. I was also partially patterning the piece on the styling of N.C. Wyeth (Wyeth's work was always clearly illustrative). The result, I think, was something akin to mural art. I think I met most of my goals and the illustration accomplishes what it needs to. So...thumbs up.
Posted by Noah Kroese at 4:14 PM