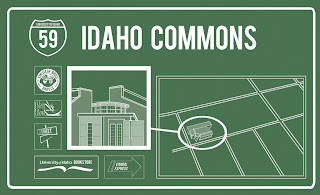 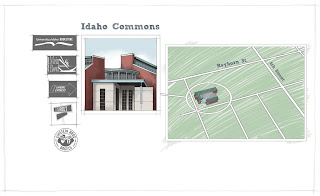 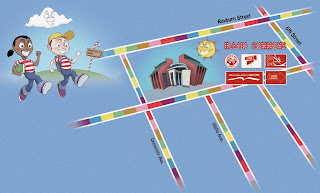 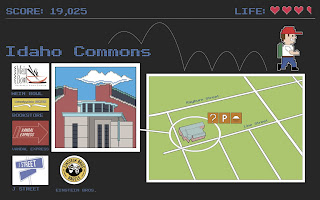 Last Thursday I started the concepts for a new project. I've been contracted by UI Auxiliary Services to produce a map of campus that highlights locations specific to three departments. For the concept phase, I was given only two guidelines: It needs to be accurate and fun.

These are the concepts I presented today. The first, based on highway signage, was a way to present the graphic information in a simple, non-threatening (familiar) manner. I started with the idea of silhouettes or icons and that morphed into the highway concept.

The second is meant to be more illustrative (almost comic book-like). In an ironic twist, it's now an effort for me to make my illustrations look hand-drawn using the tablet. I have to purposefully let mistakes alone. I have some pretty exacting aesthetics, so that's a challenge.

The third concept is a parody of the CandyLand board game. I decided to build the last two concepts around more "retro" elements, and CandyLand is a game I played and loved as a kid, so I assumed it might pluck at the nostalgic strings of many students. Though I think I was able to emulate the look and feel of the original board game, ultimately I think this particular concept is a bit of an eyesore.

Finally, continuing with the retro theme, I decided to use NES games as the inspiration for the final concept. The result looks to me like a mix between Super Mario Brothers and Kickle's Cubicle. I lobbied for this option, but the illustrative concept was eventually chosen. I'm pretty happy with that, though.
Posted by Noah Kroese at 4:23 PM No comments:

Dear Mr. Spammer (and everyone else)...

Howdy. In the interest of full disclosure, I have now enabled the comment moderation function on this blog. Basically, I'll be reviewing every comment before they post. No need to worry: I'll be rubber stamping every comment with the exception of those that include links to porn sites. There's been a bit of a back and forth lately with me and some person who insists on piggybacking lascivious links in the comments section here. So here's the result. Dear Mr. (or Ms.) spammer: In the words of Madam Mim, "I win, I win!".
Posted by Noah Kroese at 7:21 PM No comments: