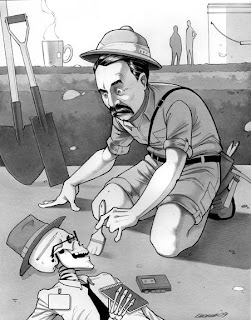 This is last week's illustration for "The Boise Weekly". The article deals with how media consolidation is forcing beat reporters out of work, leaving their beats (specifically local government offices and departments) to communicate with the public on their own (typically through web-based tools). I decided to focus on the scarce or extinct beat reporters themselves. Being a newspaper ex-pat myself, I can sympathize with the difficulties within the field. The archaeologist is based on Howard Carter, the man who discovered Tutankhamen's tomb.

To date, this is probably my favorite Boise Weekly illustration. Aesthetically, it's in a style I've been working on lately (one between cartoonish exaggeration and a more graphic novel-style approach). I even like the drawing itself, which is very rare. Overall, it was a fun and exciting assignment.
Posted by Noah Kroese at 6:36 AM

I really like this one. I also think that the skeleton is reminiscent of Victor Frankenstein in his coffin. Great job!