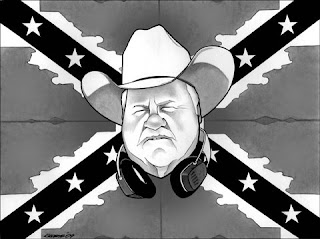 This illustration accompanies a story involving a conservative radio talk show host named Zeb Bell and some controversial comments he has made on his show. The article also delves into Idaho stereotypes, rural Idaho ideologies, and what constitutes hate speech.

I think this is one of the best illustrations I've produced for the BW thus far. Bell's portrait/caricature turned out nicely (I didn't even have to alter his expression from the reference photo I used). What makes the illustration germane to me, however, is the background. Ordinarily I would treat the background as ancillary, but here it ties the entire piece together. The Idaho silhouettes forming the negative space of the confederate flag (a symbol of many things, one of which is an entrenched approach to racial relations in this country) seems to me to be an excellent way to visually communicate that, in some parts of Idaho, old times there are not forgotten.
Posted by Noah Kroese at 2:23 PM