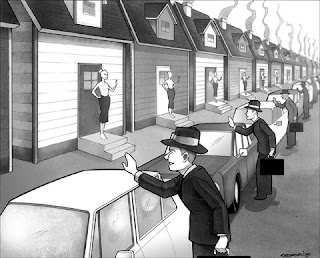 Here's the most recent Boise Weekly illustration. This is a great example of ridiculous work ethic. I spent four full days on this illustration and was paid the same amount as would have had I spent an hour. I have mentioned before the advice I once received from another professional, which is to treat every project with the same deference. However, there comes a point (particularly when attempting to run a profitable business) that one must draw the line (heh heh..."draw the line"...heh heh). That aside, I love the way this illustration turned out and have no regrets on the time I committed. The story deals with sprawl in Boise, Idaho and the amount of pollution said sprawl creates. This piece was done entirely by hand (as opposed to copying the elements and resizing them to create the perspective) as I was out of town and did not have access to Photoshop.
Posted by Noah Kroese at 7:43 AM